Home › Blog › Where Do South Carolina Spiders Go During The Winter?

Where Do South Carolina Spiders Go During The Winter?

The creepy truth is that some spiders don't go anywhere for the winter. They're in your home all year long. We have some spider species in South Carolina that can live exclusively indoors. The common house spider (also called the American house spider) is one of them. This spider species is the one that creates those wispy webs in the upper corners of the rooms in your home. Often, one American house spider will create a few webs and tend them, rather than hanging out in one web, waiting for a meal. But those aren't the spiders we're talking about today. We're talking about the spiders that are currently on the outside of your home, and what happens to them during the winter. 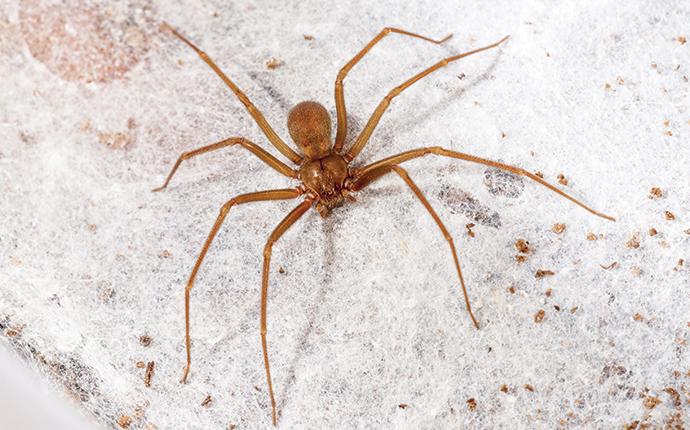 When we talk about the hibernation of spiders we use the term diapause. While the two terms are somewhat interchangeable, diapause provides more insight into what actually happens to spiders in the winter. It is a "pause" in the development of a spider in response to the conditions in their environment.

If conditions are favorable, spiders are active. If conditions are unfavorable, spiders enter a low-energy state and wait for those conditions to change. There are a few factors that influence whether or not a spider will go into diapause. The three that are most easily observed are sustained low temperatures, poor food supply, and a reduced photoperiod. During the winter, spiders can experience all of these factors. This can cause them to tuck themselves under tree bark, in a hole, under a rock, or in a gap of your home. But spiders don't need to enter diapause if conditions are never unfavorable. And they will come out of diapause as soon as conditions become favorable. Do you see how it works?

What's Really Going On With Spiders

There is much controversy among academics about whether or not spiders overwinter in homes. While there is no study we can point to that conclusively demonstrates that spiders get into homes in the fall, we look to the process of diapause for our answer.

Spiders have a natural sort of antifreeze. It protects them from freezing to death. So they don't "technically" have to get into your nice warm home to survive. But sustained low temperatures will cause them to slow down and conserve their energy. If it is cold long enough, they'll look for a place to hide for a little bit. If they choose a gap in your home, they could find springtime temperatures inside and avoid going into diapause at all.

While spiders are resistant to the cold, the insects they eat are not resistant. This drives many insects into homes during the winter. While spiders don't know where those insects went, they do notice that they're gone, and the reduction in food supply can make them go into diapause. What happens is they conserve their energy until they can feed again. If a spider accidentally gets into your home and finds food in your wall voids, attic spaces, and common areas, what do you think they're going to do all winter? That's right. They're going to do what they do the rest of the year. They don't need to go into diapause because there is plenty of food.

Some spiders are affected by shortened days and a reduction of daylight. But spiders that are nocturnal are not concerned about shortened days. This is simply not a factor for some spiders.

Will You Have More Spiders In Winter?

We can't tell you for sure that you'll have more spiders in your Aiken home this winter. But we can tell you that spiders will be active in your home if they find a way in. The secret to keeping them out is to remove attractants and seal up any entry points they might use.

If you'd prefer to not have spiders (and all of the insects they eat) in your home, reach out to us. We can help you get control of those pests. Contact Aiken Pest Control to learn more today.